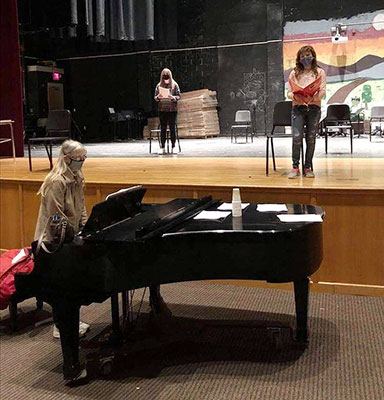 The Fort Plain-Canajoharie Drama Club is proud to announce an online performance of “On Broadway: Directors’ Choice!” This musical review will include 21 songs from famous Broadway shows. The production includes full costumes, lights, sound and sets. Meet the cast.

Performances will include numbers from Broadway favorites such as “RENT,” “Chicago,” “Spring Awakening,” “A Chorus Line,” “Mary Poppins,” “The Sound of Music,” “Lion King,” “Wicked,” “West Side Story,” “Into the Woods,” and more. The production will also include four songs from “Les Miserables,” which the drama club was scheduled to perform during the spring of 2020 and had to cancel due to COVID-19 restrictions.

The production is directed by Mr. Will Ryan and Mrs. Lauri Broady, with musical direction by Mrs. Norma Bowley. Technical direction is provided by Mr. Mike Broady and costuming is by Mrs. Lisa Hill and Miss Autumn Dodson. Student crew includes Noah Ehle on sound, Matthew Ehle and Clayton Welch on lights, and Tucker Jones and Anthony Paradiso on stage crew.

“On Broadway: Director’s Choice” will be taped for home viewing and posted on the YouTube channels of both school districts. The performance will be available beginning on April 5. 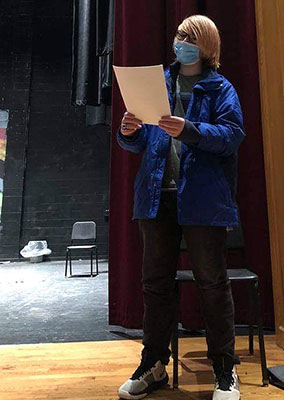 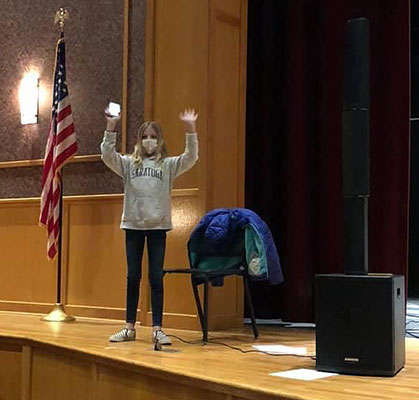 Six Fort Plain Jr./Sr. High School students have been named Student of the Month in honor of their accomplishments. They received certificates on March 31.

The students were nominated by their teachers for the award in recognition of outstanding accomplishments in academics, athletics, character, community service, hard work, kindness, leadership, positive attitude, and responsibility. 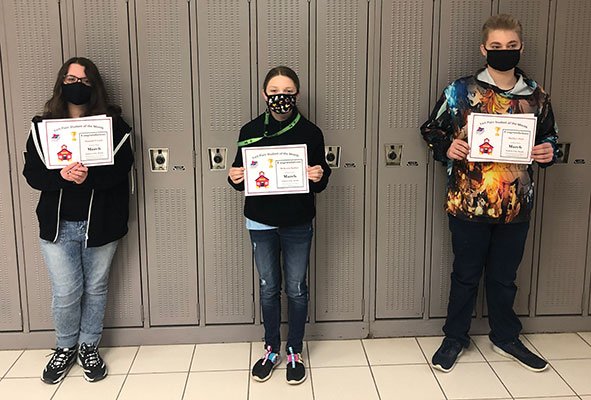 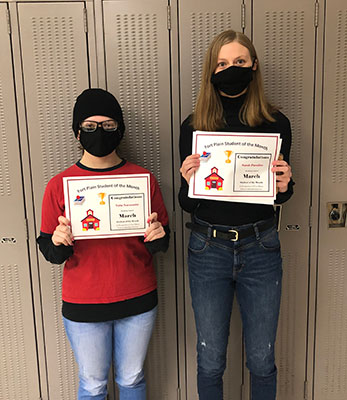 Above from left, Talia Narzymski and Sarah Paradiso
Not pictured: Ethan Kilmartin

Congratulations to the following students:

Our high school cheerleaders have been working and practicing, and all are welcome to view their cheers online beginning Thursday, Feb. 25, at 3:30 p.m., and after that date by clicking on their link at that time on our View Sports Online webpage. 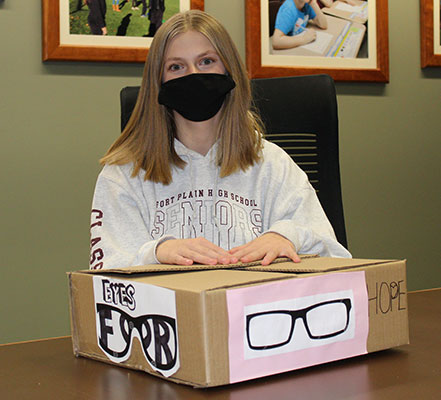 Sarah Paradiso enjoys helping others, so when she learned of an opportunity to partner with Eyes For Hope, she was right on board. The Fort Plain senior is leading a donation drive for eyeglasses for those in need.

Through March 3, donations of prescription and non-prescription eyeglasses in good condition can be left in a drop box at the Fort Plain Jr./Sr. High School main entrance during school hours, and at Center Street Station in Fort Plain and Sportee Designs in St. Johnsville, businesses that Sarah approached for support. Sportee Designs will also donate a pair of reading glasses for each pair of donated eyeglasses they receive.

Sarah is partnering to help Eyes For Hope with fellow high school students who are active in the Hugh O’Brian Youth (HOBY) organization.

“I went to a HOBY youth leadership weekend at SUNY Oneonta my sophomore year,” Sarah said. “I spent the weekend making new friends and learning how to be a leader, as well as doing a community service project making blankets for organ donors and their families. Even after that weekend, we, in our area groups, have looked for ways to help out in our local community. This year we are partnering with Eyes for Hope.”

At the close of the donation drive, Sarah will ship the boxes of eyeglasses to Eyes For Hope, which will in turn distribute them to individuals who need them.

“The goal of my Eyes For Hope donation drive is to help make people feel they are making a difference, especially during a time when it’s hard to have positive interactions,” Sarah said. “There are easy ways to do it, [and this is a way] to try to reach out and do what you can.”

Grades 9 through 12 students may sign up for the Fall 2 sports of girls and boys soccer, football, and girls volleyball. Complete the form posted on the Athletics webpage by Friday, Feb. 26, 2021.

Sports start March 7 and run through May 1, and students need a physical to participate.

The Hilltoppers will take to the basketball court on Wednesday, Feb. 10, starting their season at home and in Amsterdam. Spectators will not be allowed, but the games will be streamed and recorded for viewing online.

At a Feb. 1 special meeting, the Fort Plain Board of Education approved the offering of higher risk winter sports in accordance with state and local Department of Health and athletic league requirements and as long as certain health and safety conditions are met. The meeting followed a Jan. 29 announcement by the Montgomery County Executive and Public Health Director that they’d approved schools within the county to offer higher risk winter sports, subject to certain requirements.

Over the weekend, we learned that an individual in the high school community tested positive for COVID-19. The individual was last in school on Monday, February 1. Anyone identified as a close contact was contacted directly by the county health department.

The district is working closely with the Montgomery County Public Health Department, and they are advising on any necessary quarantine. Please note that the Health Insurance Portability and Accountability Act (HIPAA) and other privacy laws restrict us from disclosing or confirming any personally identifiable information. We cannot identify anyone who has tested positive.

We will continue to work closely with the health department and keep you advised of any further information. Our goal remains to keep our schools open and safe for students and staff alike. Please contact my office with any questions. Thank you.

At a Feb. 1 special meeting, the Fort Plain Central School District Board of Education approved the offering of higher risk winter sports in accordance with state and local Department of Health and athletic league requirements and as long as certain health and safety conditions are met.

On Jan. 29, 2021, the Montgomery County Executive and Public Health Director announced that they had approved schools within the county to provide higher risk winter sports, subject to certain requirements.

Fort Plain Central School staff and leadership developed a plan to offer winter sports, including varsity girls and varsity boys basketball, junior varsity boys basketball and varsity cheerleading, in accordance with all applicable state DOH, county DOH, and league health and safety requirements, which will be implemented during all practices and games, and under the following conditions:

NYSPHSAA Return to Interscholastic Athletics, January 2021
[Note 3/9/2021: NYSPHSAA has updated the above document.] 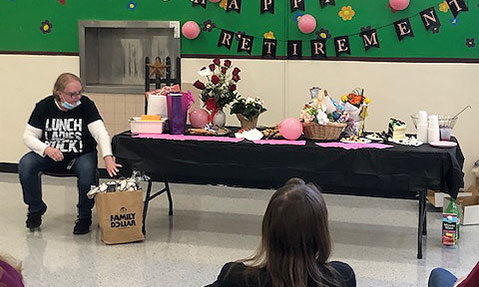 Fort Plain Central School bid farewell to three long-time employees who are retiring this week from decades of serving the district. Staff and students alike extended their congratulations and best wishes to John Fureno, Dawn Surnear and Philip Thibodeau.

John Fureno is retiring from teaching fifth grade math at Harry Hoag School. He has served Fort Plain for several decades as a general education teacher for multiple grades and as an athletic coach.

“John is a role model for us all, always smiling, always embracing the day with a positive, can-do attitude,” said Lauren Crisman, Harry Hoag principal. “In addition to teaching, John has been a valuable member of the FPCSD athletics department. He has served as a multi-season coach, investing in our young athletes by coaching the sports of golf, bowling and baseball.

“Colleagues and students alike regard John as one of the most kind, endearing and caring faculty members to ever walk the hallways of Harry Hoag Elementary School. He will be deeply missed by all.”

In bidding goodbye to a dedicated teacher, coach and colleague, Fort Plain wishes John all the best in his retirement.

Proud dad: John is at left in the photo below, taken at his son’s graduation from Fort Plain. 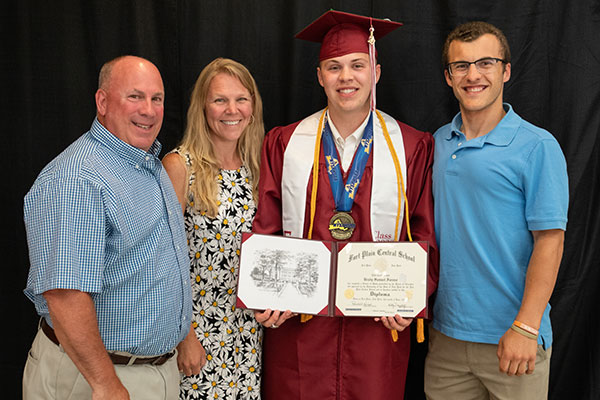 Dawn Surnear is retiring from her position as head cook in the Harry Hoag School kitchen. She began working for the district in 1999, and has served more than 21 dedicated years in the food service department. Dawn joined the Fort Plain staff because the school hours worked well with her own children’s schedules, and because she enjoys cooking and working with children. She worked her way up from a part-time position to full time and then to head cook.

“Throughout her career, Dawn has enjoyed trying new recipes and helping kids to try new things,” said Lauri Broady, school nutrition director. “She is known for her creativity and the kitchen decorations that have brought joy to students for many years. Dawn has always been a person to step up in a time of crisis, helping in the district in times of everything from floods to COVID. Her dedication to our school community has been admirable, and she will be missed by all.

“Please join us in wishing Dawn well in her well-deserved retirement and her plans to do more traveling, enjoy projects around the house, and continue her love of creating painting, crafts and gifts of all kinds,” Broady added. “Congratulations, Dawn!”

In the photo below, Dawn on the job and at a retirement celebration. Note her shirt: Lunch Ladies Rock! 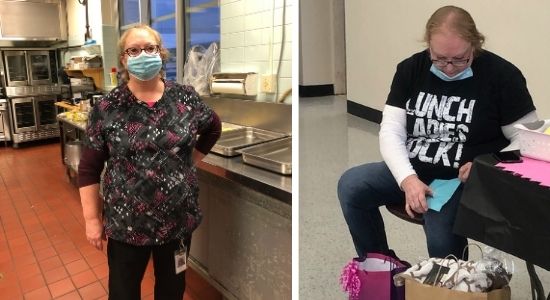 Philip Thibodeau is retiring from teaching health and physical education (PE) at the junior/senior high school. He has taught in the district for 24 years. In addition to teaching, Phil has coached the Hilltoppers in a variety of sports including varsity and modified girls basketball, junior varsity softball, modified soccer and modified, junior varsity and varsity baseball. In 2016, his coaching abilities helped the varsity baseball team become the Class D NYSPHSAA state champions.

“Phil is a quiet force, for good, as a teacher, a coach and a colleague,” said Dr. Deborah Larrabee, Jr./Sr. High School principal. “His uncommon empathy for his students makes him an educator who will long be remembered by those whose lives he has touched.

“He is witty, quick to laugh, and just as quick to say the thing that will get others laughing – often at their own behaviors,” Dr. Larrabee continued. “Phil graduated from Fort Plain in 1983, and returned to his alma mater to help the young people of the community he loves and dedicated himself to. He will be missed, but forever remembered. Thank you, Phil Thibodeau.”

Charlie Karker, athletic director, has known Phil as a Fort Plain student and a colleague. He said, “Phil was known to be very diligent and determined to accomplish what needed to be done in order to become what he wanted to be as an adult and a human being. The same can be said of Phil, the athlete. He was very coachable, did what was asked, and led by example – qualities every coach wants from their athletes.”

Karker quoted football coach, Lou Houltz, to summarize Phil’s philosophy of teaching and coaching. “Ability is what you are capable of doing. Motivation determines what you do. Attitude determines how well you do it.”

Phil helped foster students’ abilities, attitudes and motivation to help them succeed in school, in sports and in life. Fort Plain will not be the same without him. Fort Plain wishes him a retirement filled with health, fun and happiness. 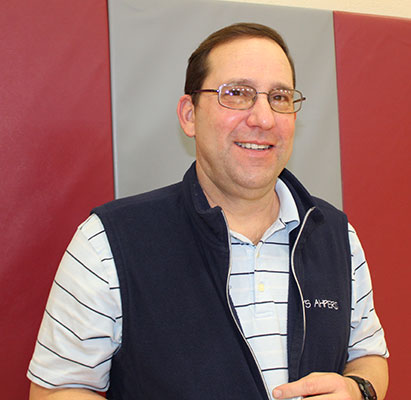 Farewell to Phil: Philip Thibodeau on the job at Fort Plain, photoed shortly before his retirement.