Fort Plain Jr./Sr. High School has been named a School of Distinction by the New York State Public High School Athletic Association (NYSPHAA) for achieving Scholar-Athlete status for all of its varsity teams during the past school year. Fort Plain is one of only 56 high schools in the state to achieve this honor.

The school received a School of Distinction and Scholar-Athlete trophy and certificate from NYSPHAA after the close of the 2019-20 school year. All of the members of Fort Plain’s varsity teams achieved honor roll.

NYSPHAA’s Scholar-Athlete award honors students and teams for excellence in their studies. To be named a Scholar-Athlete team, at least 75 percent of a roster must achieve a grade point average of 90 or above. 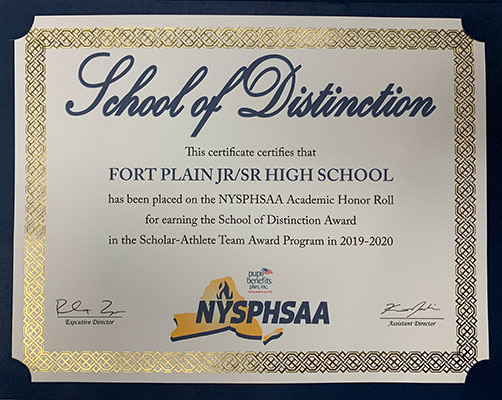