June may be Pride Month, but kindness, understanding and inclusion are year-round goals of the GSA student organization at Fort Plain High School.

Likewise, the focus of the organization is much broader than its full name – the Gender & Sexuality Alliance – would indicate. GSA groups can be found in schools and communities across the country.

A group of students formed the GSA at Fort Plain High School during spring 2019 and began holding meetings bi-weekly the following fall. “We first wanted to get together to talk about problems in general, not only in school, but in our community and the world,” said Liz, a GSA member. “That morphed into regular meetings, and we talked about what the group wanted to be.”

“We show people they have support, not just related to sexuality or gender, but for life problems. We show them that there are more people out there that they can trust,” said Bree, a fellow member.

Maiya, another member of the GSA, added, “We are not here for ourselves, but to help other people. Our group is not just made up of LGBTQ students, but also of people who are allies and who support inclusion.”

With this in mind, GSA members brainstormed and developed activities for Pride Month, which is observed nationally each June. They created a banner that their fellow high school students, faculty and staff signed, committing to following the Ally Pledge: “I believe all students, regardless of sexual orientation or gender identity/expression, deserve to feel safe and supported. That means I pledge to:
• Not use anti-LGBTQ (lesbian, gay, bisexual, transgender, or queer) language or slurs.
• Intervene, if I safely can, in situations where students are being harassed or inform school personnel.
• Support efforts to end bullying and harassment.
• Encourage others to be allies.”

During lunch recently, the group offered pride swag which included bracelets, temporary tattoos, and stickers, and led an LGBTQ pride trivia game to help others learn more about pride history, events and efforts toward inclusion.

“It’s going pretty good,” Bree said. “Lots of people played the game and signed the banner, showing they believe in equal rights for everybody and not discriminating, and that no matter who you are, that you are important.”

About the establishment of the GSA at FPHS, Liz said, “It’s important because a lot of kids don’t belong to other organized groups and this gives them an opportunity to come together.”

Going to a small school in a small community can be challenging, the students noted. Maiya said, “We are here to support and so people feel like they are not alone. Our club offers friendship and being there for others.”

When asked to describe in one word what GSA has done for them, the students came up with two: safety and support.

“The GSA offers kindness, understanding and acceptance,” said club advisor and school counselor Kayla Mahoney. “They aren’t promoting anything – rather, they stand for diversity, equity and inclusion for all.”

Students interested in joining the GSA can talk to any of the club’s members or contact Mrs. Mahoney in the high school counseling office. 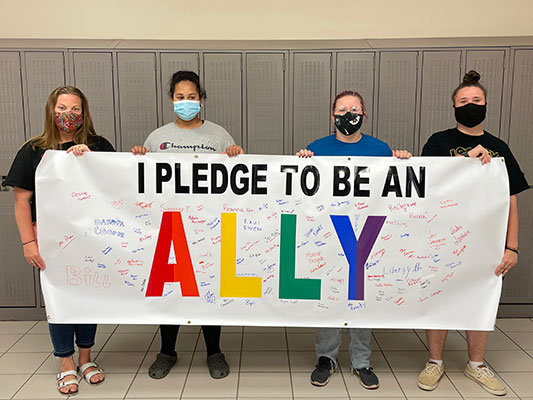